Abstract – The increased demand for remote applications necessitates a significant increase in bandwidth. This creates a barrier between the expanding demand for wireless spectrum and the limited number of wireless resources available. The radio spectrum has traditionally been assigned in a predetermined or statistical manner. The spectrum is not fully utilized in this type of allocation. As a result, the spectrum is underutilized. To ensure that unused spectrum is adequately utilized, it should be dynamically allocated. This research is focused on spectrum sensing based on cyclostationary feature detection for accurate, rapid, and efficient main signal detection. When secondary users fail to recognize the white space, it either causes substantial interference with the prime user or prevents the unoccupied band from being reused. There are numerous strategies for detecting the unoccupied band, the most basic of which is energy detection, which is inefficient. Spectrum sensing based on cyclostationary feature detection (CFD) needs to take advantage of the modulated signal’s second order periodicity.  For the performance evaluation of cyclostationary feature detection, simulation factors such as Pd, Pfa and Pmd were used.

CR is a relatively new technology that opportunistically reuses spectrum to greatly increase its availability [1]. The simplest approach for detecting the vacant band is energy sensing, although it is ineffective. [2, 3]. Other spectrum sensing approaches include CFD and MFD (see Figure 1)

Despite the fact that MFD has the most excellent detection performance, it does necessitate earlier awareness of the primary information, such as packet format, which is a disadvantage.

CFD can be employed for accurate SS by utilising the second order periodicity found in most modulated signals [5, 6]. CFD sensing has been proposed in the past and is a more consistent form of SS at low SNR when integrated with other methodologies such as neural networks. This CFD effectively utilises a modulated signal’s second order repetition, such as a sinusoidal waveform. [4]

Figure 2 depicts the cyclostationary feature detection block diagram. The input signal is received by BPF, which is then designed to evaluate the energy around the associated band before being sent to FFT. The signal is now FFT, and the correlation block correlates the signal before passing it to the integrator. The Integrator block’s output is then evaluated to a threshold. This evaluation is used to determine whether the PU signal is present or not.

Let as predictable complex sine signal s(t) that has been routed through an AWGN channel and can be written as: [10,11,18]

As talk about earlier, a modulated signal x(t) is called a periodic or cyclostationary signal in the broad sense if its mean and autocorrelation demonstrate periodicity as shown below.  [16] 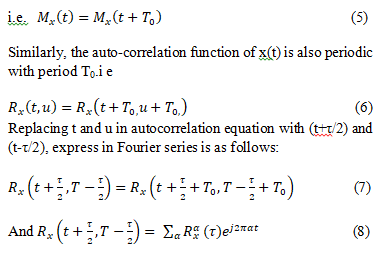 The receiver’s cycle frequency is now considered to be known. The cyclic autocorrelation can be computed on the basis: 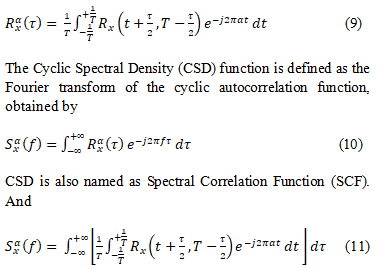 The standardized correlation between two spectral components of x(t) at frequencies (f + α/2) and (f -α/2) during an interval of length Δt can be used to calculate SCF. Taking all of this into account, SCF can be expressed as

Here, the PSD is a special form of spectral correlation function for α = 0, where α is cyclic frequency. [12, 14]

CFD, on the other hand, necessitates a vast processing capacity and lengthy observation intervals, making it challenging to execute. Furthermore, it is unable to detect the nature of communication, limiting CR’s flexibility

This section presented numerical expression for Pfa, Pd and Pmd for the CFD respectively.

In CFD technique according to the Central Limit Theorem [17], the probability distribution function (PDF) of MX(t) T for both hypothesis H0 and H1 can be approximated by Gaussian distributions. 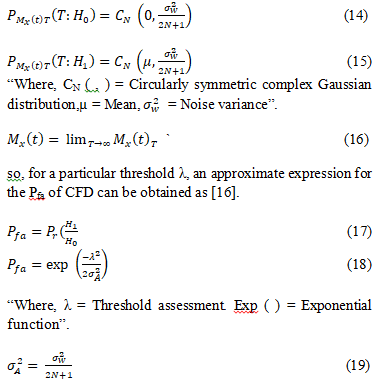 Now, the Pd of PU for the CFD method can be considered by the given equations 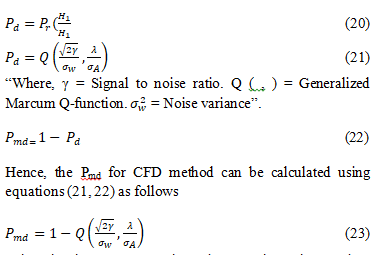 “The plot between Pd and Pfa is termed as the receiver operating characteristics (ROC). ROC is the probability of the sensing algorithm (here the sensing algorithm is CFD method) claiming that the primary signal is present. Thus the Pd increases with increasing value of Pfa. Also Pmd decreases with increasing value of Pfa”. [12, 15]

A frame model is used to detect the spectrum in a desirable environment, and a CFD mechanism is used to allow numerous users to access a single spectrum. This entails following a series of steps.

Step 1: Set parameters like sample S and SNR. It is essential to receive a spectrum of random variables.

Step 3: take a decision by fusion centre either PU present or absent.

Step 4: The performance of CFD is evaluated according to the simulation parameters such as such as Pd, Pfa, with respect to SNR. 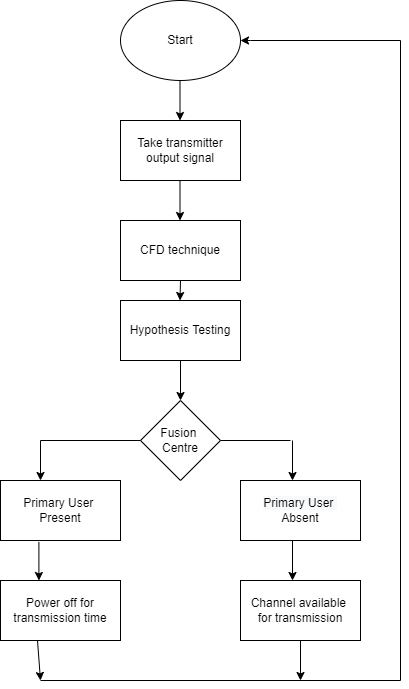 The cyclostationary feature detection approach is the most reliable and successful method for spectrum sensing. Even though this method adds to the system’s complexity, it is well worth the risk because its noise immunity is far superior to existing systems. The CFD method for estimate and the spectral autocorrelation function methodology for spectrum analysis are provided in this paper. According to a simulation, CFD is best for signal detection with low SNR.

Fig 4: ROC curves between Pd Vs Pfa of CFD over AWGN, Rayleigh and Rician fading channels

Fig 5: ROC curves between Pmd Vs Pfa of CFD over AWGN, Rayleigh and Rician fading channels.

Fig 6: ROC curves between Pmd Vs number of secondary user

Fig 7: ROC curves between Pd Vs number of secondary user 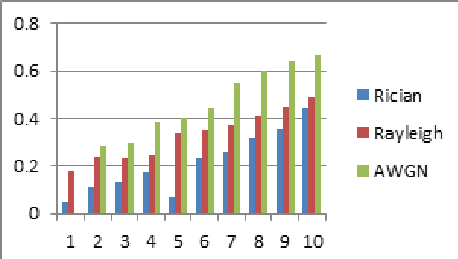 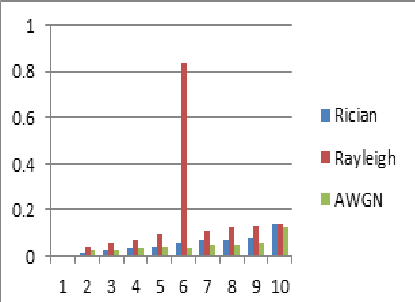 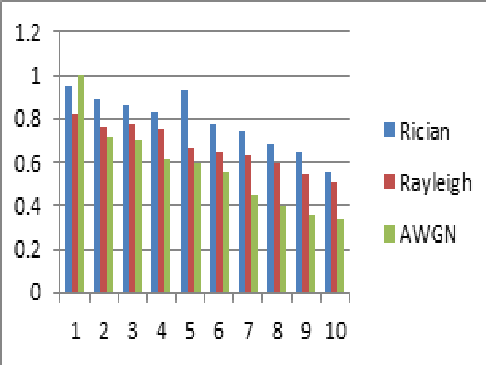 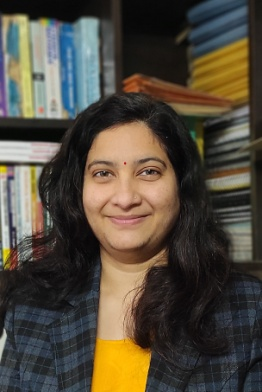 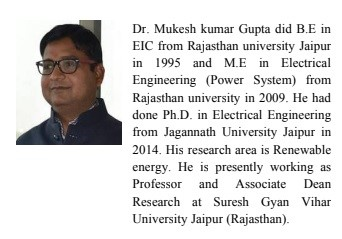 Dr. Sandhya Sharma has completed B.E from REC in 1996 presently NIT Raipur (Chhattisgarh) and completed M.E in Digital Communication Engineering from M.B.M Engineering Jodhpur in 2008. She has done Ph. D in Electronics and Communication from Suresh Gyan Vihar University Jaipur in 2019. Her research area Photonic Crystal Fiber and Digital Communication System. She is presently working as Assistant Professor and Head of Department at Suresh Gyan Vihar University, Jaipur Rajasthan