The reaction of an Iron(II) complex with a Schiff base produced from the condensation of Indole-3-carboxaldehyde or Thiophene-2-aldehyde with 4-amino-N-(3,4-dimethyl-1,2-oxazole-5-yl)benzenesulfonamide (Sulphisoxazole) in a 1:1 molar ratio resulted in a novel series of Iron (II) complexes. Elemental analyses, conductance measurements, molecular weight estimations,  IR, UV, and 1H NMR spectrum investigations have all been used to explore the coordination behaviour of Schiff bases towards iron atoms.

Sulphonamides in combination with various pharmacological agents with antibacterial1-3, insulin-releasing4-5, anti-inflammatory6, antidiabetic7,8 and antitumor9,10 activities ia an important class of drugs. Sulfisoxazole is a sulfonamide bacteriostatic antibiotic that is often used in combination with trimethoprim and has major pharmacological features as a commercial medication. Meningococci strains resistant to sulfonamides were suppressed by sulfisoxazole or sulfadiazine in conjunction with trimethoprim (TMP)11. It was, therefore, considered of interest to synthesize Fe (II) derivatives of Schiff bases derived by the condensation of thiophene-2-aldehyde and indole-3-carboxaldehyde with Sulpha drugs. In this paper, we are communicating the results of these studies. The structures of the starting materials are shown in fig. 1.

The entire chemicals used in this work are of AR grade, the solvents were dried by standard method and all reactions were carried out under an anhydrous and oxygen-free atmosphere.

The Schiff base was prepared by the condensation of sulphisoxazole and indole-3-carboxyaldehyde or Thiophene-2-aldehyde in a 1:1 molar ratio which was further refluxed with ethanol as a reaction medium for 6 hours on the water bath. After the reflux, the crystals of Schiff base were separated on cooling with the help of filter paper and the crystals were washed by ethanol. They were dried and then recrystallized with acetone. The structure of Schiff base ligands is shown in fig.2. Table 1 lists the key characteristics and analyses of these ligands.

The ligands were then reacted with Iron (II) acetate in molar ratio of 1:2 using methanol as reaction medium and refluxed for 8 hours and the progress of the reaction was tracked by the estimation of acetic acid in the azeoptrope. The solvent was removed, and the products were washed with dry cyclohexane multiple times before being dried in vacuo. Table 2 lists the key characteristics and analyses of these complexes. The reaction of iron (II) acetate with the sulpha drug ligand and methanol in a 1:2 molar ratio can be represented as:

Where N~NH represents the bi-functional tridentate Schiff base ligand. The resulting complexes are coloured solids (Table 2), which are soluble in DMSO, alcohol, benzene, carbon tetrachloride, chloroform and DMF. At ambient temperature, these complexes act as non-electrolytes in DMF, with molar conductance values ranging from 12 to 18 ohm-1cm2mol-1. The magnetic moment values at ambient temperature (303K) demonstrate the diamagnetic nature (0.04-0.20 B.M.).

A broadband is detected in the area 3400-3150 cm-1 in the enhanced ligand spectra. This band is assigned to (NH), which does not appear in the complexes demonstrating this group’s deprotonation. In the spectra of metal complexes, a sharp and strong band in the range (1600-1620 cm-1) due to the n(C=N)12,13 frequency of the free azomethine group appears in the ligands, this band is moved to the lower region (10 cm-1) suggesting coordination through the azomethine nitrogen to the metal atom. The presence of n(Fe-N)14 at 280 cm-1 in the spectra of metal complexes further supports this theory. Furthermore, the presence of coordinated water15 is indicated by the existence of another band in the spectra of complexes of the type [Fe(NN)2.2H2O] at 862 cm-1.

In DMSO-d6, the 1H NMR spectra of ligands and their iron (II) complexes were obtained. A complicated multiplet signal may be seen in the spectra of ligands in the range of d~6.8-7.5 ppm for aromatic protons, and it is practically at an identical position in the spectra of metal complexes. In the spectra of metal complexes, the signal owing to the methyl proton [-C(CH3)=N-] at d~1.85 ppm changes to d~1.95 ± 0.02 ppm, implying coordination through the azomethine nitrogen to the metal atom. The Schiff bases have an NH proton signal at d~10 ±0.5 ppm, which is not seen in iron complexes, showing that nitrogen is chelated with iron metal. The signals in the spectra metal complexes at d~3.74-3.78 ppm and d~4.20-4.38 ppm are due to coordinated water molecules. Although the existence of the cis-isomer is indicated by the emergence of two signals, the widening of the signals at d~3.94-3.78  ppm also suggests the presence of trans form16. As a result, the cis- and trans-forms of the resultant complexes are likely to be in balance.

The electronic spectra of the ligands contain two bands around 250 nm and 315 nm which are typical of the spectrum of the sulpha drug and can be attributed to the f-f* and p-p* benzenoid transition. In the resultant iron (II) complexes, a new band of about 410 nm is seen due to the azomethine group’s n-p* electronic transition.

On basis of the spectral data and elemental analysis the following structure can be assigned to these newly synthesized derivatives as shown below: 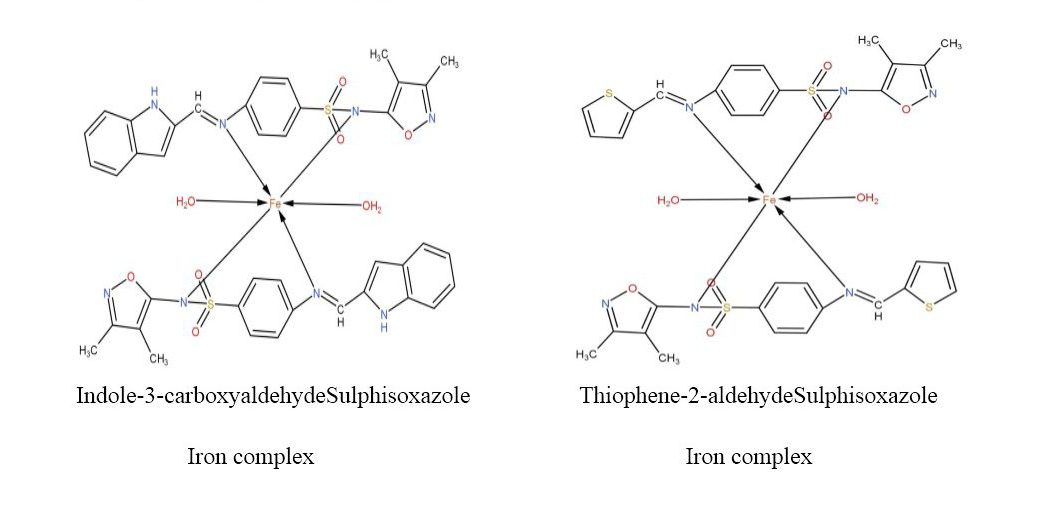 Kjeldahl’s technique was used to calculate nitrogen. The complexes were examined as previously stated17. KBr discs were used to record infrared spectra on a Perkin-Elmer-577 spectrophotometer in the 400-200 cm-1 range. The PMR spectra were obtained using a Perkin-Elmer Model RB-12 spectrometer with DMSO-d6 as the solvent and TMS as the internal standard. A systronics conductivity bridge model was used to quantify molar conductance in anhydrous DMF at 36°C. The Rast camphor technique was used to determine the molecular weights.

The authors are thankful to the Principal, LBS PG College, Jaipur for providing the laboratory facilities.