In this growing world Diseases are course to the society, it not only hampers the physical but also the mental condition of the patients. Diabetes is one of them causing the disturbance in metabolism leading to impairment in insulin production; as a result, glucose uptake is reduced, resulting in elevated blood glucose levels.

Some oral hyperglycemic medicines are used to treat diabetes, but they have several drawbacks. In this research work, the anti-diabetic potential of Moringa Concanensis is elaborated on Alloxan induced Diabetic rats by using different concentrations of Test drug against standard drug Glibenclamide. The Diabetic impact of the test medication was tested in rats, and its efficacy was compared to that of the standard treatment Glibenclamide. The Test drug is given to diabetic rats for 28 days. Blood glucose levels and body weight were statistically evaluated at the end of the research. Moringa concanensis produced a significant amount of lignin-based on the study’s findings.

The demand for the primary requirement of the body is fulfilled by Glucose. As a result, impaired glucose metabolism may result in a physiological imbalance, which requires correct treatment. Any deviation from the normal glucose metabolic route may thus result in impaired glucose metabolism, the establishment of hyperglycemia, and, eventually, diabetes mellitus (1, 2). As a result, insulin shortage leads to incorrect glucose metabolism, leads to disturbance in whole body circulatory movements. The number of Diabetic persons is increasing continuously every day. A recent survey suggests that most adult population is victims of this disease due to changing lifestyles and increased stress levels.

There is no sufficiently therapeutic medication available in modern medicine to cure diabetes mellitus. Although various oral hyperglycaemic medications are used to control diabetes mellitus, accounted with side effects like fatty liver and cardiac problems finally hampers the well-being of the individual.   (5).

They are also not authorized for the treatment of diabetic women who are pregnant.

Alloxan monohydrate, Nicotinamide and Glibenclamide were purchased from Sigma-

Fresh Moringa Concanensis Nimmo leaves are gathered in Sultanpur, Uttar Pradesh, India. The chosen plant was validated by the ICAR-Kamla Nehru Krishi Vigyan Kendra in Sultanpur, Uttar Pradesh. This plant’s herbarium is made; its leaves are washed and then dried. After drying are powdered with the help of a blender. Then 10 gm of the powdered leaf is extracted with the help of ethanol in the soxhlet apparatus. After collecting the filtrate it is dried and concentrated for further research work.

This study included Wister rats of either sex (180-250 g). The animals were kept in a controlled environment with a 12-hour light/dark cycle, a temperature of 22 degrees Celsius, relative humidity of 55%, and free access to food and water. The protocol for this study has been approved by the Institutional Animal Ethics Committee (1711/PO/E/5/13/CPCSEA) at KIPM in Gorakhpur, India, and experimental procedures are carried out in accordance with the guidelines for the safe use and care of experimental animals according to the guidelines.

Experimental Design 🙁 7) to conduct the experiments animals are divided into five groups. The groups are as follows:

All biochemical parameters are estimated before the commencement of the trial, as well as after the first, fifth, and ninth weeks of STZ treatment. Blood samples are taken from the retro-orbital sinus under aseptic circumstances. Immediately following blood sample collection, samples are cold centrifuged for 10 minutes at 3000 rpm to separate serum/plasma and kept at -20 °C until analysis.

A conventional glucometer is used to test blood glucose levels at all time points. The rats are fasted overnight before being measured the next day. Under aseptic circumstances, the rats are restrained with restrainers, leaving the tail exposed. The distal part of the tail was then cleaned with 70% alcohol. After drying, the tail was pierced with a lancet. After wiping the original drop, a subsequent drop is utilized to measure the glucose level with a glucometer. The readings are taken in duplicate.

The animals are decapitated at the end of the 28-day experiment. Blood was drawn, and sera were separated by centrifugation at 3000 rpm for 10 minutes. All groups namely Diabetic and Standard have been checked for SGPT and SGOT according to the instruction given by the manufacturer.

The Statistical data is presented as Mean±SD. One Way ANOVA is used to show statistical significance. The Test graphs were compared with Diabetic and Standard drugs.

Alloxan, an oxidized derivative of uric acid, is a frequently used chemical agent in labs for causing diabetes in animals. It induces loss of beta cells in the pancreas by an oxidation process, resulting in diabetes. The research is focused on treating Alloxan-induced Diabetic rats with Moringa Concanensis Nimmo Leaf extract at different concentrations.

For many years, glibenclamide was the traditional medication used to increase insulin production from beta cells in the islets of Langerhans, because of this Glibenclamide (5mg/kg) is used as standard medicine, the bodyweight of Normal control is increased as compared to diabetic control where there is a decrease in body weight of standard is increased. The initial body weight of Ethanolic extract of Moringa Concanensis Nimmo Leaf 200mg/kg and 400mg/kg increased slightly after 28 days of treatment.

The Ethanolic effect of Moringa extract showed a great decrease in blood glucose levels. It is seen that the best result is obtained after that standard drug. The diabetic control group showed a significant increase in blood glucose throughout the experiment. The result is shown in Table 1; while SGPT and SGOT are given in Table 2 hyperglycemic effects of EEMC might help release insulin from pancreatic beta cells. Treatment with EEMC in diabetic rats resulted in considerable weight gain, demonstrating the Polyphyto mixture’s effectiveness in effectively treating diabetic patients.

In alloxan-induced diabetic rats, an ethanolic extract of Moringa concanensis leaves was shown to be more efficient in the therapy. ACAE’s anti-diabetic action may be attributed to improving the impact of insulin and increasing insulin production from pancreatic beta cells. As a result, this study shows that Moringa concanens is an ethanolic extract that has a powerful anti-diabetic effect and might be utilized to successfully treat diabetes. 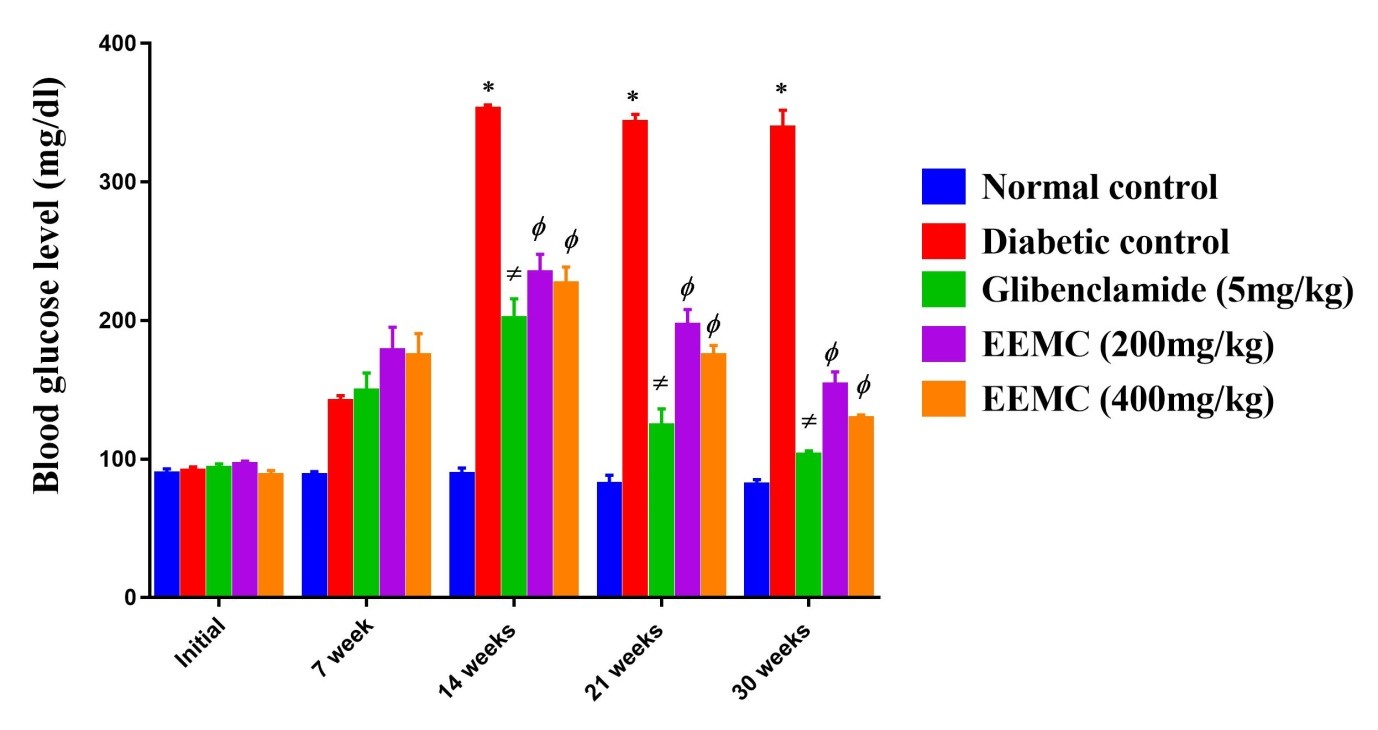 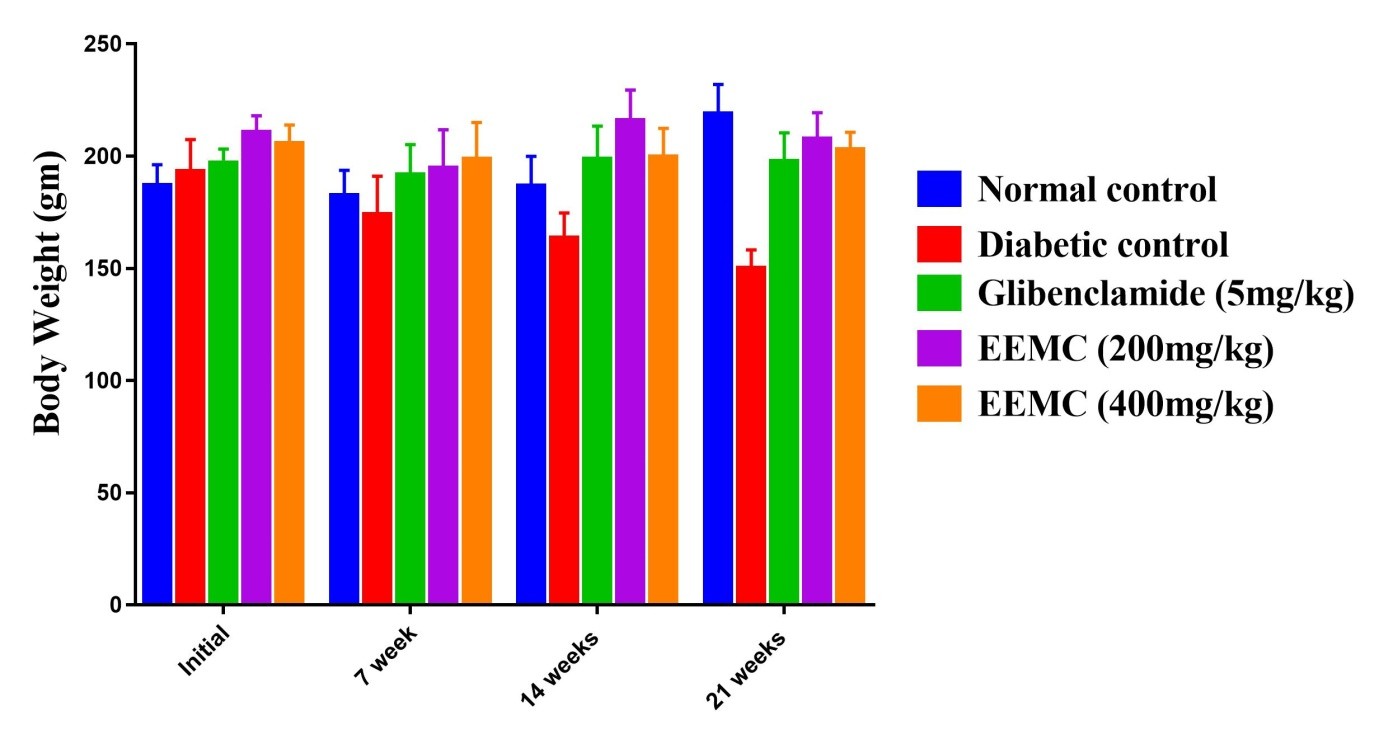