Metal-organic frameworks (MOFs) for hydrogen storage have continued to receive intense interest over the past several years. MOFs have attracted worldwide attention in the area of hydrogen energy, particularly for hydrogen storage. MOFs are a family of nanoporous materials and class of compounds. MOFs have higher surface area and porosity, low densities, flexible and tuneable porous structure, these are the attractive properties for gas storage. For these reasons MOFs have been extensively studied. In this review, the recent developments of hydrogen storage in MOFs is presented, with a focus on surface area, pore volume, pore size. The review focuses on experimental studies. In this review, an overview on hydrogen adsorption on MOFs are presented. Synthesis processes of MOFs are discussed in brief along with their hydrogen storage capacities at different operating conditions. Different methods to improve hydrogen storage capacities of MOFs are also presented.

Hydrogen is a promising vehicular fuel due to its high specific energy, renewability and ability to be produced and oxidized without CO2 emissions. However, due to the low volumetric density of H2 gas, efficient and cost-effective storage of hydrogen remains a challenge (Alauddin Ahmed et al., 2019; Ahmed, A. et al., 2017). To overcome this challenge, storage in solid adsorbents has received significant attention as an alternative to compression in high-pressure tanks (Yang, J., Sudik, A et al., 2010; Siegel, D. J. et al., 2014).

Hydrogen storage is a major enabling technology for the advancement of hydrogen and fuel cell technologies in applications including portable power, stationary power, and transportation. Hydrogen has the highest energy per mass of any fuel; However, its low ambient temperature density results in a low energy per unit volume, hence the need for the development of advanced storage methods with high energy density capability (J.O. Abe et al., 2019). 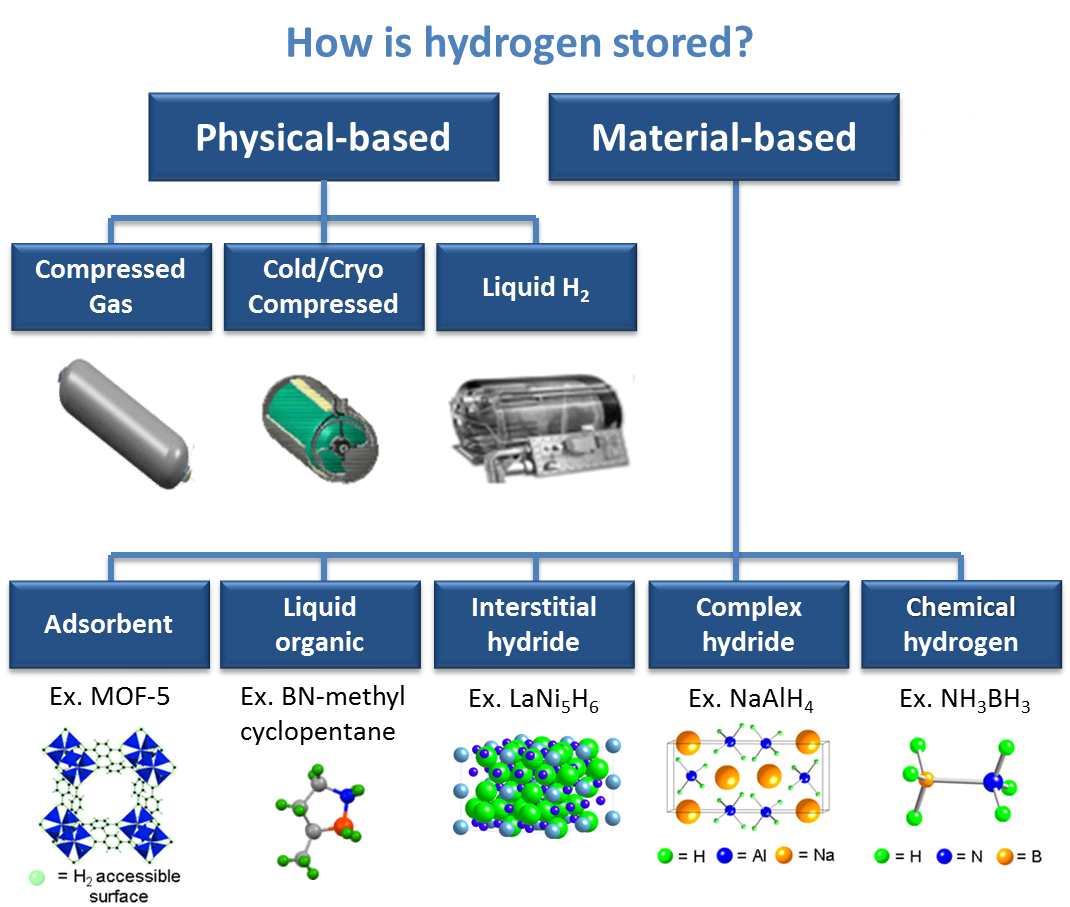 Hydrogen can be physically stored as either a gas or a liquid. Storage of hydrogen in the form of gas usually requires high-pressure tanks (350–700 bar tank pressure). Storage of hydrogen as a liquid requires cryogenic temperatures because the boiling point of hydrogen is −252.8°C at an atmospheric pressure. Hydrogen can also be stored on the surfaces of solids (adsorption) or within solids (absorption) (Vinay Ananthachar et al., 2005; Wong-Foy et al., 2006; Witman, M. et al., 2017). Hydrogen storage is an important challenge for the development and viability of hydrogen-powered vehicles. On-board hydrogen storage in the range of approximately 5–13 kg is required to enable a driving range of more than 300 miles for a full platform of light-duty automotive vehicles using fuel cell power plants (Goldsmith, J. et al., 2013; Rowsell, J.L.C. et al., 2005; Broom, D. P. et al., 2016).

MOFs are a family of nanoporous materials. It is a very promising materials for hydrogen storage due to some unique properties such as high surface area, porosity, low density, flexible and tuneable porous structure in comparison to the conventional materials like zeolites (A Dailly et al., 2011; O. Ardelean et al., 2013; R. Balderas-Xicohtencatl et al., 2018). Several highly porous MOFs structures are presented in figure 2. 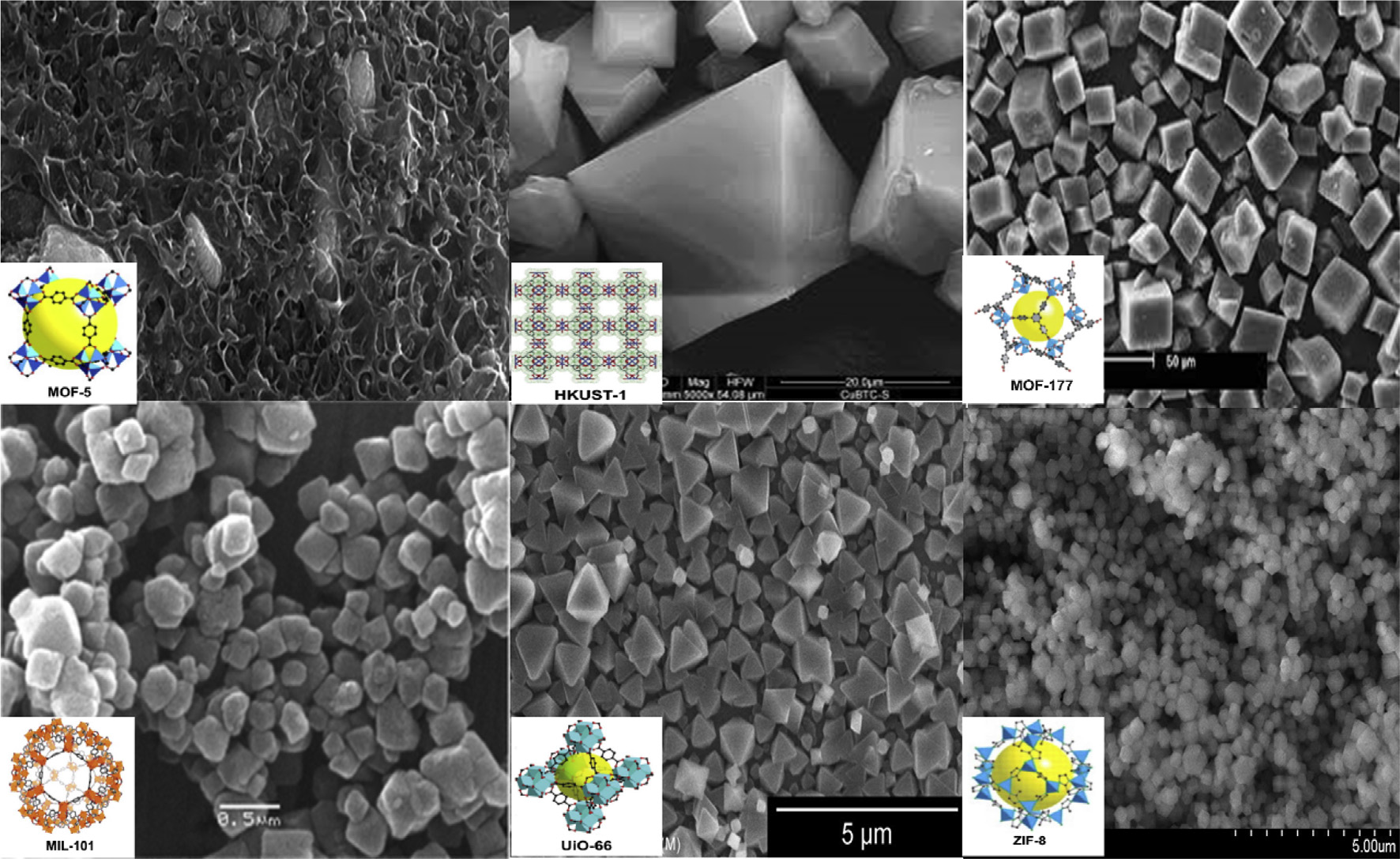 As a testament to their potential applicability for H2 storage, the MOFs have exceeded the DOE 2021 onboard gravimetric H2 storage technical targets 4.5 wt % at 77 K and 100 bar, however they are not yet to do this at room temperature, for which MOFs is reported to adsorb 1−2 wt % at 100 bar.

The porosity of MOFs is more than any other nanoporous material, double the record for porous carbon. The surface area of MOF-5 was initially investigated at 2,900 m2/g , but now MOF-5 can be activated to achieve 3,800 m2/g. In such material, 60% is open space, in which gases and organic molecules can be introduced. Differently from other porous materials, MOFs have pores without walls; they are made entirely of struts and intersections. They are open scaffolds, where the struts or intersections are sites for gas molecules to enter. That is the reason they have very high surface area, and this is the optimal way to create high surface area materials. The surface area of MOF-177 was 5500 m2/g. Now, using simple chemistry, we can get 5,500 m2/g. MOFs can be sized for various applications, including catalysis and gas separation (Omar M. Yaghi et al., 2009; R.M. Abhang et al., 2013).

The Gravimetric capacity is the amount of H2 adsorbed per unit mass, expressed as kg H2 kg-1, for example, or as a weight percentage (wt.%), is important because hydrogen has low molar mass. If a storage tank, including the material, weighs too much, the hydrogen fuel cell vehicle’s range will be limited. That is an issue, as long as the driving range, together with very short refueling times, is a major advantage of hydrogen fuel cell vehicles compared to their battery electric counterparts (Thomas CE 2009; Eberle U et al., 2010). 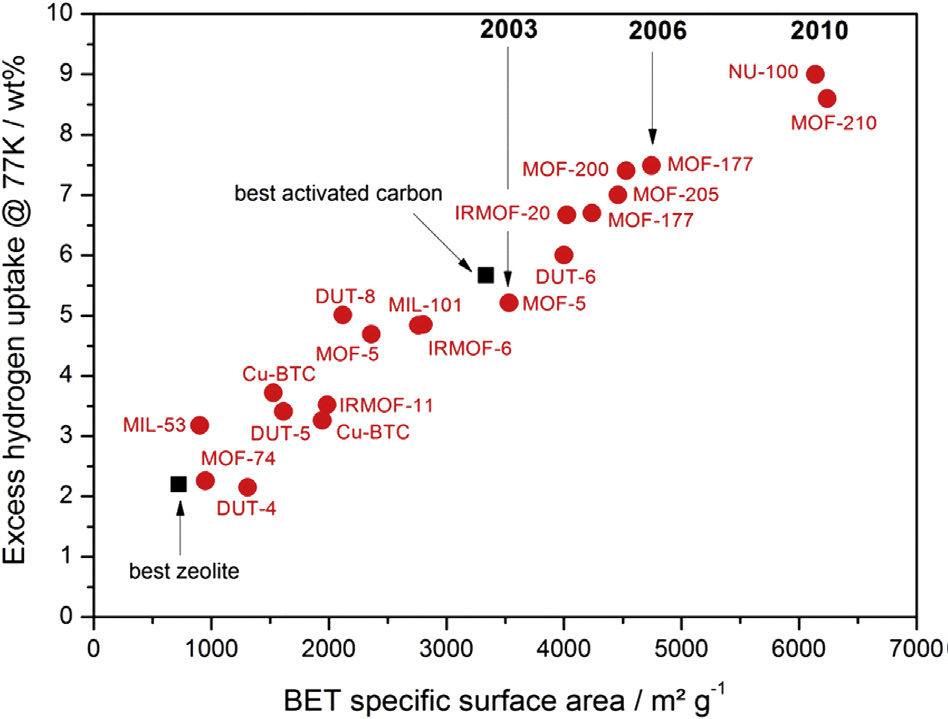 Figure 3: A plot between excess gravimetric H2 uptake, measured at 77 K and 2 MPa or above, for different MOFs, and the best performing zeolite and activated carbon (D.P. Broom et al., 2019). Reproduced, under the terms of the Creative Commons Attribution 4.0 International License (http://creativecommons.org/licenses/by/4.0/). 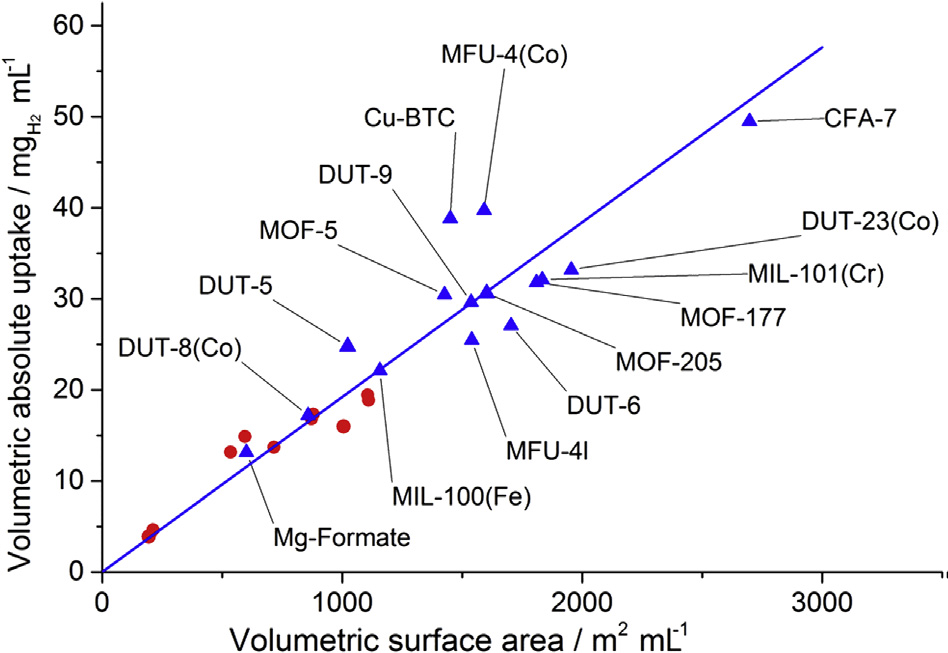 The first investigation of gas adsorption by a MOF was of methane adsorption in [Cu(4,4-bipy)SiF6]∞, which showed an adsorption capacity comparable to that of zeolites and activated carbons (Noro et al., 2000). The first example of H2 storage in a MOF was investigated in 2003 (Rosi et al., 2003). A wide range of such materials have been reported with increasingly high values for overall storage capacity and with interesting variations observed for the heats of adsorption ∆Hads of H2 depending upon the framework material.

Due to their specific functional and structural properties, MOFs are currently recognized as a considerable group of porous framework. These frameworks are made up of organic ligands or linker and metal ion clusters and metal ions. Without any doubt, another concept significantly involved in the final structure and properties of MOFs is the selected primary building blocks (PBUs). However, many other synthetic methods and parameters, such as pressure, temperature, pH, reaction time and solvent, must be considered as well (Yitong Han et al., 2019). Many different synthetic approaches, including hydrothermal, solvothermal can be applied to produce MOFs relying on the resulting features and structures. The method for the synthesis of MOFs is solvothermal. Usually, metal precursors and organic linkers are dissolved in solvent and placed in a closed reaction vessel for the formation and self-assembly of MOF crystals. The common solvents used include methanol, ethanol, acetonitrile, N,N’-dimethylformamide(DMF), and N,N’-diethylformamide(DEF). The synthesis temperature is generally below from 220°C, and the crystallization time varies from several hours to several tens of days (X.Y. Chen et al., 2005; D. Wang et al., 2010; J.Y. Wu et al., 2013).

Solvothermal synthesis is a method of producing chemical compounds. It is allows for the precise control over the size, shape distribution, and crystallinity of metal oxide nanoparticles or nanostructure products. In 1995, Nalco chemical company and Professor Yaghi reported the synthesis of MOFs by Solvothermal Synthetic. The mixed solution of inorganic salt and organic adding arms is poured into a sealed reaction vessel to heat the mixed solution to form an insoluble framework, and insoluble substances precipitate and form crystals. The temperature of the reactant can reach its boiling point, so the solvent may partially or completely dissolved (H. Li et al., 1998; L. Pineiro-Lopez et al., 2014; S. Qiu et al., 2009).

Currently MOFs have been considered as a new member of nanoporous materials that recently have attracted all the consideration to materials chemistry. It is clear that MOFs will present exceptional advantages compared to other conventional porous materials and it will have a significant impact on the future of porous compounds. While novel structures and materials with notable characteristics have been created through the synthesis of MOF, improvements have been made in this area, expanding its range. This is true for both application area and the building exploited technologies. Arenas of solvothermal and hydrothermal syntheses are just evolving despite widespread use of unoriginal syntheses methods. Typically under mild reaction conditions, these techniques can be use for some materials, which leads to the production of compounds with different features and particles sizes. In particular, it may be considered in the use of MOFs and increase of syntheses. However, these alternate methods have mainly led to the reproduction of popular materials. Therefore, there is no doubt that MOFs will be synthesized in a simple, easy, green and low-cost way. The synthesis of MOFs will be in a large scale to fulfill all of the requirements. The challenges and orientations present the continual expansion interest and a bright future of MOF chemistry.

This research did not receive any specific grant from funding agencies in the public, commercial, or not-for-profit sectors.