A Study on Impact of Dairy Cooperative Societies on the Production, Income, and Employment of their Members in Jaipur Dairy, Jaipur, Rajasthan

A Study on Impact of Dairy Cooperative Societies on the Production, Income, and Employment of their Members in Jaipur Dairy, Jaipur, Rajasthan

Dairy farming is an allied activity to agriculture and in India this sector generates a regular income to the farming households throughout the year. Since milk is the second-largest agricultural commodity contributing to Gross Value Added (GVA), dairy farming is considered a major productive activity next only to rice.  Despite this, the dairy industry in India is facing several constraints as it is scattered over the entire country in innumerable micro-units in a much-disorganized form. With the help of cooperative movement and active functioning of dairy cooperatives under milk production unions, the Indian dairy industry is now showing a significantly positive transformation leading to its fast growth to meet the challenges ahead. It is also noticeable that the dairy activity further empowers women as entrepreneurs. However, greater emphasis is needed in the areas of milk production, processing, and marketing research. In this study, we have compared the performance of member and non-member segments of the milk producers trying to identify their contribution to milk production, income, and employment.

Amongst the significant sectors in Indian agriculture is the dairy sector which is the second-largest agricultural commodity contributing to Gross Value Added (GVA). Dairy occupies a prominent place next only to rice and provides a regular and stable flow of income to the farming households throughout the year. India contributes to about 20% of the world’s total milk production which accounts for nearly 167 million metric tonnes. Where the world’s growth rate of milk production is 1.8%, India is growing at the rate of 4.5%. Out of this 1.8%, India contributes 1%. In India, milk is the largest crop worth ₹ 6.5 lakh crore which is much more than paddy and wheat put together (ET Now, 2018). The cooperative movement which is popularly known as “operation flood” was launched in July 1970 by the Government of India in collaboration with the World Food Program of the United Nations. Operation Flood and dairy cooperatives emerged in India as the largest rural employment generation scheme to support the modernization of the dairy sector (India Today Web Desk, 2018; NDDB, 2017). The recent modernization has helped the dairy sector to meet not only the country’s demand for milk & milk products but also in exploiting the global market opportunities and increasing jobs for women & youth (Shringi, Khan, & Verma, 2015; Upadhyay, Pratima, & Rahul, 2019).

Despite these achievements, the Indian dairy industry is highly disorganized with innumerable small and micro-units spread over the entire country. The sector is seeing changes that promise to transform the dairy farming sector but still, a greater thrust is needed in the areas of milk production, processing, and marketing research (Mahida et al., 2018). In India, the dairy co-operative movement operates on three tier system wherein farmer members own dairy co-operative societies (DCS) which in turn own the district milk producers’ union (Jaipur Dairy in this study is the District Milk Producers’ Union). Finally the district unions collectively own the federation at state level. In the state of Rajasthan the federation is Rajasthan Cooperative Dairy Federation (RCDF, 2020). Here, the cooperative movements are playing an important role in supporting dairy development where they have shown to have a positive impact on milk producers in factors like income, employment and production of milk (Prajapat, Jheeba, & Verma, 2017). In this study, we have compared the performance of member and non-member segments of the milk producers trying to identify their contribution to milk production, income, and employment.

For the current study, three high-performing zones of the Jaipur Dairy were selected based on the highest membership and performance criteria (Personal communication – Accounts office, Jaipur Milk production Union, Jaipur). These were Bindayaka zone, Dudu zone, and Manpura Machdi (also known as Jaipur Milk Union or Jaipur Dugdh Sahakari Sangh Ltd). Twelve dairy cooperative societies (considering four societies per zone) were chosen and 180 respondents were selected from these dairy cooperative societies by the proportional probability method (Cheung, 2014; Qayyum & Jamil Shera, 2019). To make a comparative analysis between the members and the non-members, an equal number of 180 non-members were also selected.

Primary data was collected from these 360 respondents by using a detailed questionnaire specifically designed for this purpose. The data collected were systematically compiled and tabulated for facilitating the analysis and interpretation of the data.

(A) Annual milk production for dairy cooperative members and non-members

Members of the cooperative society were producing about 270 liters more milk per animal in a year which is about 8.33% more than non-members. Similarly, in the case of milk production per household, this quantity was about 29.89% more than that of a non-member (Figure 1).

The comparative performance of member and non-member segments of the milk producers indicated that the role played by the dairy cooperative society contributed significantly in increasing the milk production in the case of members as compared to the non-members.

Concerning the income earned from milk production by members of dairy cooperative society and non-members, the data shows that the income generated per household in a year by members was about ₹ 2,09,716.94 and the corresponding figure was about ₹ 1,33,533.40 for non-members (Figure 2). 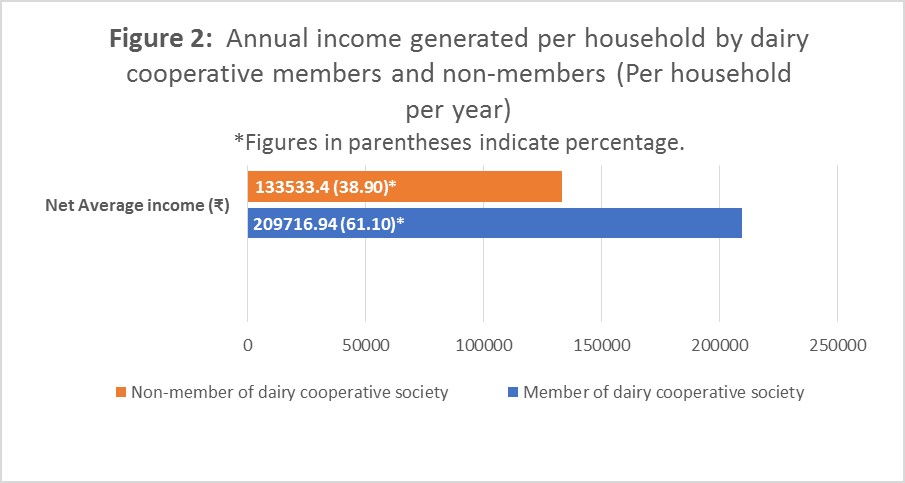 The data shows the income being 36.33% more for members in comparison to the income earned by non-members.

With regards to the impact of dairy cooperative society on employment generation, it can be concluded from the analysis that the members of dairy cooperative society have 39.36% more opportunity of employment when compared to the non-dairy cooperative members. Also, the members spend about 13.16 hours per day maintaining the milch animals on various activities such as feeding, milking, cleaning, etc. Out of the total time utilized by members, women contributed about 70.36% as compared to men (29.64%). On the other hand, the non-member utilized only about 7.98 hours in a day to perform the various activities and out of the total time utilized women contributed about 72.44% as compared to men (27.56%).

We identified that with the help of the cooperative society, the member groups showed an increment in their average annual milk production, an increment in the income generated per household, and had more employment opportunities. According to a study by Singh & Chauhan (2015), there was a much more uniform distribution of income among the member groups of their study. Our study shows that there is 36.33% more income in the members’ group, but the uniformity in the distribution of this income is the next aspect.

Also, out of the total time utilized in milk production activities, women contributed about 70.36% and 72.44% of the time for members and non-members respectively, but since the work hours were more in the member’s group, the self-confidence was seen to be higher in the women of the member’s group due to their ability to generate independent income, increasing their social self-esteem. This shows that dairy cooperative society also plays an important role in enhancing the social self-esteem of women involved through employment.

Jaipur Dairy is utilizing the technology as a tool for faster growth and development at both district and grassroots level. With the higher growth in membership and milk procurement, the management of Jaipur Dairy took a further bold step in providing a paradigm shift in technology with the introduction of Automatic Milk Collection Station (AMCS) and Bulk Milk Coolers (BMC) at the village level. Bulk Milk Coolers, popularly known as BMC, are one of the latest technological equipment used in the Milk Procurement System. A cattle feed plant has also been commissioned at Kala dera region near Jaipur with a capacity of 300 metric tonnes (MT) per day.

The organization can further improve the levels of production, income, and employment generation by providing training which is one such area where the expertise needs to be improved so that the benefits are effectively passed on to all the members. For example, training the individuals to reduce the input costs by proper utilization of resources can help in increasing the net returns in milk production. When successful, this will increase the participation and satisfaction of the members and as concluded by Wani et. al., should help the members show more commitment towards the cooperative societies (Wani, Sankhala, Niketha, & Singh, 2016).

Also, tie-ups with local banks will boost the finances needed for the members to expand their dairy farms. This will improve the production, income, and returns of each member farm and generate stable annual income and savings (Gadad & Kunnal, 2018). As suggested by Nachimuthu & Derso (2018), profits may then be effectively utilized in the creation of fixed assets and for developing infrastructure facilities. The attention should also be directed towards product diversification, quality improvement, and reduction in fixed costs as this will improve the profits even further.

The organization can also benefit by educating the customers about the importance and utility of products like tetra packs. By concentrating on improving the home delivery system of milk and allied products, the organization can improve customer satisfaction, and thus there should be business growth and expansion (Landes, Cessna, Kuberka, & Jones, 2017).

Overall, it can be concluded that the Jaipur Dairy is playing a major role in organizing the scattered dairy units in the study area by enrolling them as members. They are effectively providing the necessary input and technical services to their members and are ensuring their support for them to grow socially and economically. Further, the dissemination of knowledge and technology utilizing appropriate extension activities shall bring more non-members to immediately join the Dairy cooperatives as members to reap the benefits.

The authors declare that there is no conflict of interest.

This research did not receive any specific grant from funding agencies in the public, commercial, or not-for-profit sectors.

A relationship application you to definitely is sold with done anonymity, there’s no linking your own public levels otherwise entering a message address involved