The Credit Card Fraud detection is a challenging task for researchers as fraudsters are innovative, quick moving individuals. Credit Card fraud detection system is challenging as the dataset provided for credit card fraud detection is very imbalanced, as the quantity of false exchanges is a lot littler than the real ones. Thus, many of fraud detection models got failed due to these data sets. This aim of this research work is to enhance performance of the minority of credit card fraud on the dataset available. So, K-means clustering, logistic regression, random forest and XGBoost models are performed. This research work incorporates the Credit Card Fraud Detection models to study the transactions that end with some frauds. This paper is then used to distinguish whether payment transactions are fraud or not. This research work is to identify totally the false transactions while avoiding the incorrect fraud classifications. Different algorithms are implemented in this paper. Python Machine Learning libraries are used to perform those algorithms. The models studied in this research work are K-Nearest Neighbour, logistic regression, random forest model, XGBoost model. XGBoost is showing more accuracy then other models. Out of these algorithms, XGBoost model is preferable over Random Forest model and Logistic regression model.

The Credit Card Fraud detection is a challenging task for researchers as fraudsters are innovative, quick moving individuals. This Research is done to prevent the problem of society. With the normal procedure it is not possible to perform a fraud. The scamster must do their work with great confidence and sharply. So, businesses as well as academic communities are developing credit card fraud detection models. In this study, different approaches to fraud detection are presented. This study investigates the usefulness of applying different approaches to a problem of Credit card fraud detection.

The principle kind of credit card extortion is illegal use of Lost and Stolen Cards. Creating Fake and Doctored Cards is in the cutting edge procedures, wherein the data is hung on either the attractive strip on the rear of the credit card, or the data set aside on the savvy chip is copied beginning with one card then onto the following. Phishing websites are changing into a standard method of blackmail with a talented hacking limit. These kinds of the pages are proposed to get individuals to give their credit-cards details effectively without recognizing they have been frauded. Triangulation is comparably another method. Triangulation is the point at which a seller offers a thing at an incredibly unassuming cost through a site. At the point when clients attempt to submit the request of the item, the transporter urges to the customers or clients who are in snare, to pay by methods for email if the item is gotten by him. The seller uses a misleading card details for buying the item from a site and sends the thing to the buyer, who at that point send the trader their credit card details by means of email. The trader continues working along these lines utilizing the credit-card numbers given by buyers for buying; showing up for a brief time frame to be the individual closes the web page and begins another one.

Credit-card misrepresentation can be done in two ways, either offline or online misrepresentation (fraud). The possibilities of offline fraud are by having a stolen physical card at client confronting venue or by call center. The card issuing banks or organizations can jolt it before it is used in a bogus manner. Online misrepresentation is submitted through phone shopping, web or when cardholders not present. The loss of individual data straightforwardly adds to developing misrepresentation misfortunes for banks and merchants. It is important to collect key details for reasons of breaches to avoid losses from financial service organization. This information is planned to help extortion supervisory groups figure out where holes exist in the security issues in this industry.

[1] Portrayed highlights key experiences and customary terms in Credit card coercion and figures in this type of fraud. Dependent upon the kind of distortion looked by credit card companies or banks; various counters measures can be gotten and completed. The proposals made were presumably going to had favorable characteristics with respect to cost investment funds and time productivity. [2] Three procedures to recognize coercion were presented. At first, gathering model was used to arrange the legal and phony exchange using data clustering of areas of parameter regard. Also, Gaussian blend model was utilized to show the likelihood thickness of credit card client’s past direct with the target that the likelihood of current lead can be set out to perceive any assortments from the standard from the past direct. Finally, Bayesian frameworks were utilized to delineate the estimations of a specific client and the encounters of various pressure conditions. The standard endeavor was to investigate various perspectives on a comparable issue and see what can be gotten from the utilization of every novel system. [3] used machine learning AI methods for data mining to recognize extortion in a progressing exchange on the web, and as such organizing the exchange of information as genuine or suspicious. [4] They have implemented different extortion recognition framework such as Support Vector Machine (SVM), K-Nearest0Neighbor (KNN), Hidden Markov Model, Artificial Neural Networks (ANN), Bayesian Network, Fuzzy0Logic0Based0System and Decision Trees. According to the requirement a fair audit was done0on the current and proposed0models for credit card extortion discovery and has completed a near report on these strategies based on quantitative estimations, for example, exactness, recognition rate and false alert rate. The end of the examination clarifies the downsides of existing0models and gives a superior security0arrangements.

The data set used in the proposed work is provided by Kaggle. There are overall 30 features. But 28 out of them are renamed as V1 through V28. All are numeric values. The remaining three features are the time, transaction amount status of the transaction, it was fraudulent or not. The exact details of the features are hidden for confidentiality. The, Class, response variable is 1 for fraudulent transaction and 0 for safe transactions. Supervised approach is used in this work. There are no missing values in the data set.

In this research, all the tests are performed under following specifications:

In the classification setting, the KNN8algorithm is forming a majority vote between the K most similar instances to a given unseen observation. Similarity is defined according to a distance metric between two data points x and x0 . A popular choice is the Euclidean distance given by

Suppose the K points in the training data that are closest to x are denoted as set A. It then estimates0the conditional0probability for each class, i.e, the fraction0of points in A with that given class label.

Where I(x) is the indicator function which  evaluates to T1 when the argument x is true and T otherwise Finally, the input x is assigned to the class  with the largest probability.

Logistic regression introduced by David Cox, 1958 is a model in which the response variable Y is categorical. SVM introduced by Vapnik, 1995 was to solve the classification and regression problems. It is used to implement an optimal hyper0plane for maximizing the margin between two classes.

and the generated output is: 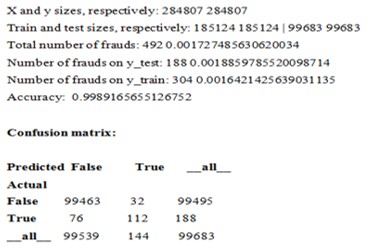 The random forest algorithm by L. Breiman, 2001, has0been successful as a general-purpose classification and regression method. This approach uses several randomized decision trees and aggregates their predictions by averaging, has shown excellent performance in the setting having greater the number of observations then the number of variables.

XGBoost model is also compared, which is based on Gradient Boosted Trees and is a more powerful model compared to both Logistic Regression and Random Forest.

XGBoost uses the gradient boosting (GBM) framework at its core. It uses the features of scikit-learn library. It is an optimized distributed gradient boosting library. But wait, what is boosting. Xgboost is effective for data in tabular form having limited variables set.

According to the cross-validated MCC scores, the0best-performing model is random forest, evaluating its performance: 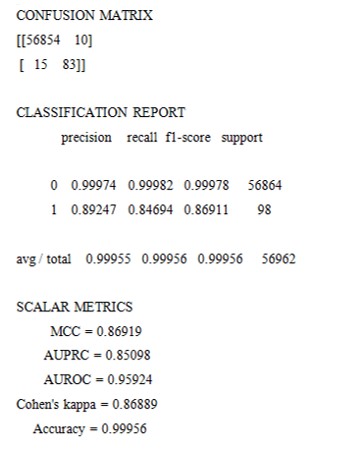 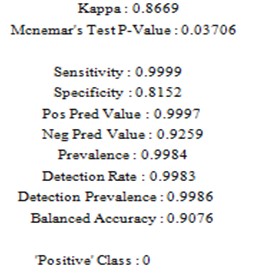 According to the0MCC, the performance of random forest is not so effective on the0training set.

The proposed methodology adopted is proficient and viable. The random forest model and XGBoost are options to precisely recognize fraudulent credit card transactions. We found that the five factors V17, V14, V10, V12, and V11 are most associated with fraud. The fraud transactions can look fundamentally the same as standard exchanges; it is hard to place them into a different gathering dependent on highlights alone. The K-implies grouping model delivered a low precision of 54.27%. Subsequently, K-means would not be the favored model for this data set, as it didn’t effectively anticipate cheats and it likewise created a great deal of false positives. The strategic relapse gave us the best outcomes. The logistic regression gave us an extraordinary precision rate of 99.88%, with 0.079% of the approval set being false negatives (or 0.49% of the number of frauds). It has been appeared even a logistic regression model can accomplish great review, while a significantly more complex Random Forest model enhances strategic relapse as far as AUC. Be that as it may, XGBoost model enhances the two models. The Random forest model can be improved further by manipulating the hyper parameters.

Issues of Fraud detection are mind-boggling require a considerable measure before the implementation of AI algorithms. The utilization of AI algorithms and business analytics ensures that the cash of the customers will be safe and not effectively messed with. In future work, Random forest mode would be improved for detecting fraudulent transactions.

MILFs finding young males need to be switched on

Blond bombshell performing incalls and you will outcalls towards you!

: Joshua and you will Sabrina interact on a song

Ergo, this isn’t shallow to locate linear or quadratic relationships

I disagreed with the lay there was a homosexual Agenda

Immediately after hitting their large while the late 2020 during the January, the latest CBOE volatility index (

Huge numbers of people utilized Craigslist`s Personals having arranging purely platonic and you can casual run into gender, along with pleasant schedules